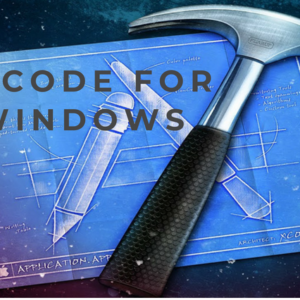 Xcode for Windows 10: We know that Building Apps and Software in Mac OS isn’t Easy Task compare to other Platform. If you are Planning to Build an App in Mac then You need SOFTWARE DEVELOPMENT KIT (SDK) called Xcode.

Xcode is basically an integrated development environment (IDE) that consists of a set of software development tools which are designed by Apple for developing software and different applications on Mac OS X and iOS. It is an interface builder which can also be considered as a testing application and an asset management toolkit. In the previous post, we have discussed Best iOS Emulators to run iOS apps on Windows but in this article, we will share a complete guide about How you can design iOS apps on windows platform. To do this we need to use some 3rd party software like Virtual Machine etc (We will discuss this later)

We know that not all the developers are using MAC So, Xcode SDK is not available for any other operating systems like Windows and Linux except Mac OS X and iOS because There are many reasons and compatibility issues behind this unavailability of Xcode. But It doesn’t mean that Windows user can’t build Mac Software on their PC.

Requirements to Install Xcode on Windows 7/8/10

If you have decided to install and use Xcode for your Windows PC then You need some basic Hardware and Software Configuration for your Device/PC which are as follows:

We are going to discuss total 3 ways you can Run Xcode on Windows:

NOTE: For Windows user as we are using Virtual Box to install Xcode on Windows, make sure that you have a working Mac OS X virtual machine. If you don’t have a copy of an installed Virtual Box, then please Download Virtual Machine from HERE as it’s Open Source and easily available.

Before moving forward we need to understand that What is Hackintosh?

Hackintosh is a type of computer in which a non-Macintosh or unsupported computer is converted to run a Mac OS. In our case, Non-macintosh means windows users.

In this Method, You will use Hackintosh instead of Virtual Machine and the rest installation process is same as above. You can use Hackintosh and follow the steps given above and you can easily able to run Xcode on your Windows OS PC. But the installation might take some time and it’s also possible that you will found some Bugs and Errors in between. for more detail and step by step guides, You can visit Hackintosh.com

The Process is like Cloud Mining where you can rent and install your App on Mac cloud servers called Macincloud. In this method, you don’t need any special requirements for hardware and No need of installation of the Virtual machine on your device. you simply use Cloud Storage space provided by Macincloud where you can Run Xcode on your Windows.

So these are the methods I use to run Xcode on Windows to develop applications. After testing all of three methods I will recommend you to go with first which is based on using Virtual Machine on your system. It runs smoothly without any hustle. Let me know if you are facing any issue regarding installation or execution process.