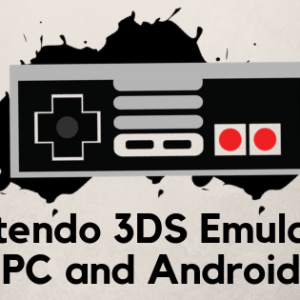 Nintendo 3DS Emulator: Nintendo is one of the oldest and very famous consumer electronics and video game company of Japan. If you are a big Fan of Mario and Pokemon then you must have heard of Nintendo. Nintendo was Founded on 23 September 1889 by Fusajiro Yamauchi.

Nintendo 3Ds Game console was released on February 2011 and it was a great success. It is capable of displaying stereoscopic 3D effects without the use of 3D glasses. Currently, due to technological advancement, most of the game lovers don’t use any Switch or game console instead they like to play games like GTA, CS: GO, PUBG etc on Computer and PlayStations. But retro games have their own class. 90’s kids still love playing Mario on PC using XBOX Emulators and ROM for Retro Games.

Check out – Can You Convert .EXE file to APK file format?

If you don’t have Nintendo Game console and still want to enjoy the Console games on PC and Android devices then here are some best working Nintendo 3DsEmulatorss for you. You just have to install the Emulator on your System and need to download your Favorite games and you are good to go.

Many users are asking that they aren’t able to play Nintendo DS games on many Android devices. So we have found some best Nintendo 3DS Emulators for Android. These all are currently Working Android emulator at the time of writing this post. So check out and let me know which one you recommend.

DraStic DS Emulator is paid Android Emulator for Nintendo Games but Let me tell you this one is one of the best in the list because of it’s featured.

nds4droid is a free Nintendo DS emulator. It’s not THE BEST but nds4droid has all the basic functionality with medium graphics. According to the developer’s opinion, it says that the emulator also supports the OUYA game console. Based on users comments and experience nds4droid is a bit slow on higher-end phones but developers are trying to fix the speed issue in the next update. Sometimes the Auto Save function doesn’t work properly. The most common issue with this emulator is LAGGING. But still, you can play almost all the games on Nintendo 3DS Emulator.

With more than 1 Million plus installed, RetroArch is another free and an open-source project made on Libretro platform which has features like OpenGL, cross-platform camera support, location support. RetroArch serves the following features:

But some users have reported that they can’t get native controls working on a GPD XD+ while playing games and some of them have faced the error “task failed: downloading index” while downloading new cores.