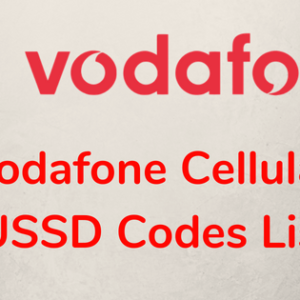 Vodafone is a British Multinational Telecommunication Company. The headquarter is located in London, UK. Vodafone was founded back in 1991 and currently expanded his territory in Asia, Africa, and Europe. On an average Vodafone is currently working in 25 Countries across the globe.

Unlike Idea, Vodafone has crossed 200 Million Subscribers back in 2016 and has total 22 telecom circle. So come to the main topic of Latest Vodafone USSD Code List, In this post, we have listed Vodafone USSD Codes for Checking Vodafone Customer Care Number, Vodafone Prepaid Balance Check, Vodafone Internet Datapack usage, Vodafone exclusive offers, USSD Codes for Activate and Deactivate cricket updates and VAS Services etc. Most of the Codes are tested but maybe some codes may not work in every handset.

In the above list, some Vodafone service has the same USSD Codes. Most of the codes are working (Depends on the handset whether it’s 2G/3G/4G). Let me know which one isn’t working for you.