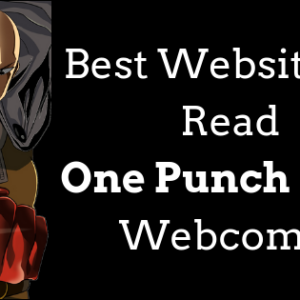 In our last post, we have discussed Best Comic Sites to read Comics online but if you are searching for specific Comic Websites to read One Punch Man Comic to kill your boredom then Stay tune with us. You are in the perfect place.

One Punch Man is Japanese Super Hero Webcomic created by “ONE”. The first episode was published in early 2009 and because of its story and plot Comic started gaining popularity and at the end of 2012, One Punch Man hits 7.9 Million Hits. Later it’s renamed as One Punch Manga. Basically, the main theme of the comic is to save the world by fighting with the evil powers.

It’s Japanese Comic so it’s but obvious that the language is Japanese but in this post, you can find a collection of Sites from where you can read these comics in the English language as well.

MangaPanda is the best Website to read One Punch Man. MangaPanda has all the latest chapters starting from 2009 till today. Overall you can find up to Chapter 141. All the latest episodes are uploaded regularly for all the OPM users. MangaPanda allows you to download the series to watch later in the English language also. In short, MangaPanda is an excellent platform where you can found multiple comics episodes.

MangaFox is a very popular site to read all comics related to Manga. It has a Huge Collection of Comics in a different genre. You can check out its Top List and other categories to read other Japanese comics. According to my point of view, Interface isn’t much attractive but the comic quality is as good as MangaPanda. One more advantage of Manga Fox is it’s Free of Cost, no need to pay for any subscription. 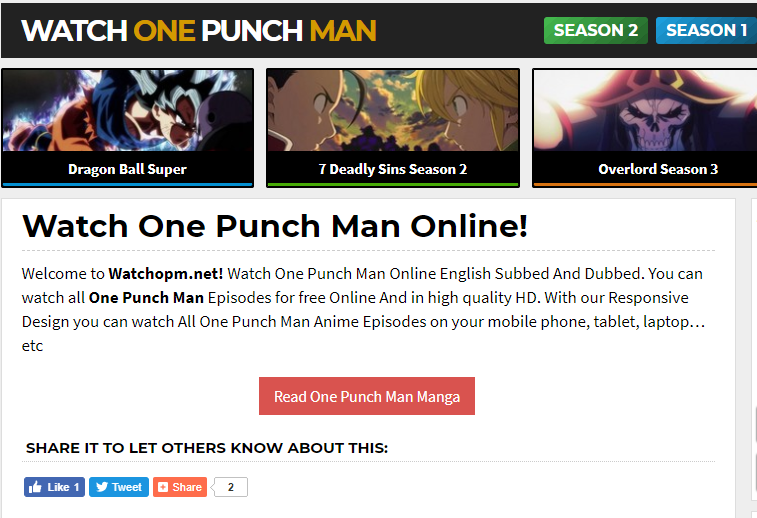 Watch OPM is a great site to Watch One Punch Man comics Online in English Subbed And Dubbed. You can watch all One Punch Man Manga Episodes for free Online and in high-quality HD. The site design is responsive which gives you a good reading experience on Mobile, Tablet and other Fablet devices. The only thing I don’t like about WatchOPM is its PopUp ads (Sometimes when you click on the site anywhere some annoying popups opens in new windows. So make sure you ignore them). WatchOPM has a total of 94 CHapters of OnePunchMan Manga 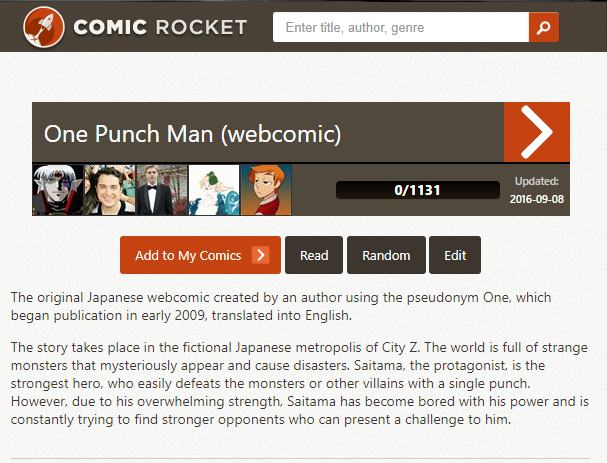 Comic Rocket has big Archives collection of One Punch Man Manga episodes. As on the website you can see all the links of old and latest episodes where you can download and read OPM Manga Comics online and Offline. In the Archive section when you click on the Link of OPM episode a new window will open where you can see all the comic pages. Navigation on the site is simple and user-friendly. Overall according to my experience Comic Rocket is a good option to read One Punch Man Comics. 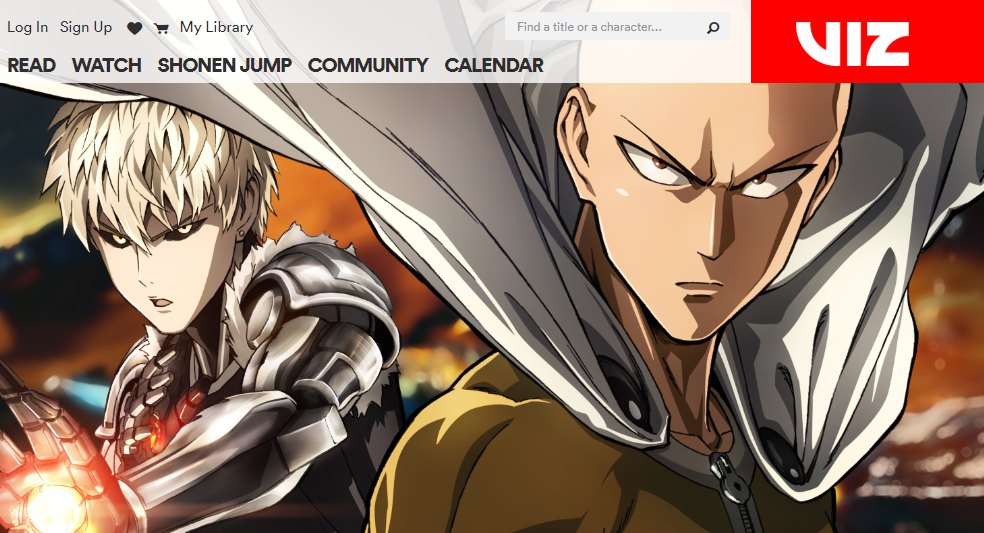 VIZ is another great option to read OnePunchMan comics while you can watch OPM’s trailer in Blueray quality (Check out the site for more details). It’s not free because you have to latest edition/episode from their store. A Paperback Edition will cost you approx $9.99 and Digital Comic version will cost you $6.99. 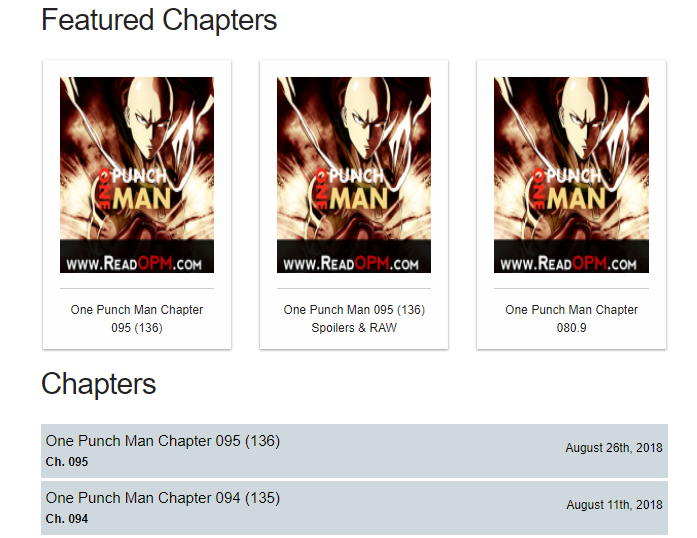 ReadOPM is only dedicated to OnePunchMan Comics where you can find A to Z episodes like other comic platforms. All the comic episodes are in the English language. Once new episode came out ReadOPM team will upload the episode with English Subs. Site navigation is simple and easy. A user can click on the episode links and in a new window, the comic will open with downloading option. 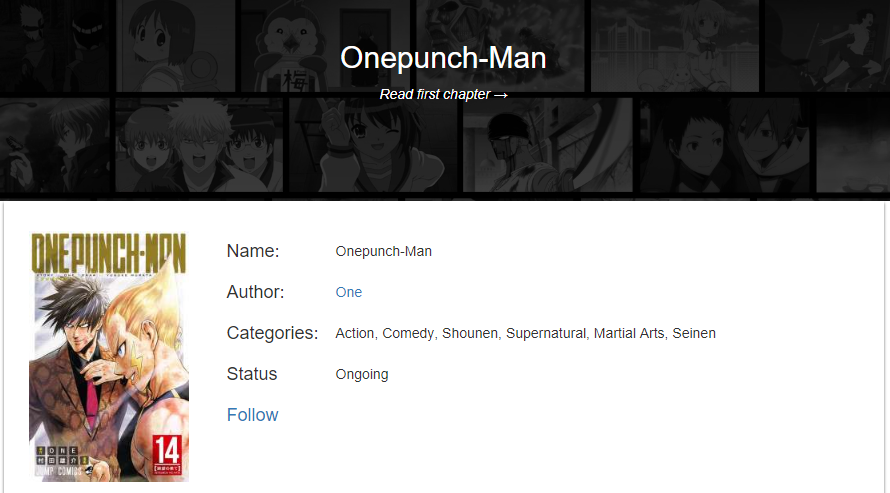 Comics in QManga is available in multiple languages like English, Japanese, French and Chinese and Italian. QManga has a huge collection of Manga Comics. You can search your favorite comic in search Bar. You can make an account in Qmanga and Follow any comics to get notifications when a new episode will be uploaded.

Guys, These are some of the great Comic websites to watch OnePunchMan Comic. In my point of view I really like MangaPanda and MangaFox because of its interface and easy navigation features moreover both sites are uploading new episodes as soon as it was released. So, if you like this post don’t forget to share and comment and let us know which comic site you like the most to read your favorite comic online.

Have a Great Day!