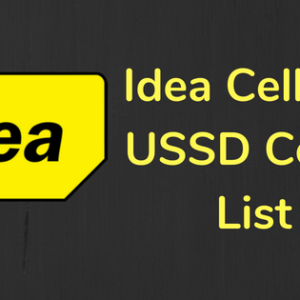 IDEA is among the best telecom service provider in India which was established back in 1995 mainly in Gujarat and Maharashtra as Birla Communications Limited. It’s a pan-India integrated GSM operator which has more than 225 Million Subscribers as of June 2018 (Figures are Based on Survey). I think most of you don’t that IDEA is a joint venture of Aditya Birla Group, TATA Group, and AT&T Wireless Corp. Before 2002 IDEA was known as Birla AT&T Communications Limited.

Before Reliance JIO Idea and Vodafone are dominating Telecom Industry but due to Reliance JIO features and offers Both the company has to cut down their Rates due to cut-throat competition. IDEA is currently providing their services to 22 Telecom Circle coverage and It owns spectrum in 900 MHz, 1800 MHz, 2100 MHz, 2300 MHz and 2500 MHz bands across the country.

So, Guys, this is the Complete and latest List of Idea Cellular USSD Code list. If you find any code not working let me know in the comment section and I will remove that code from the above list also If you know any other code suggest me that on comment box so that I can include in the list. Till then Have a Great day.